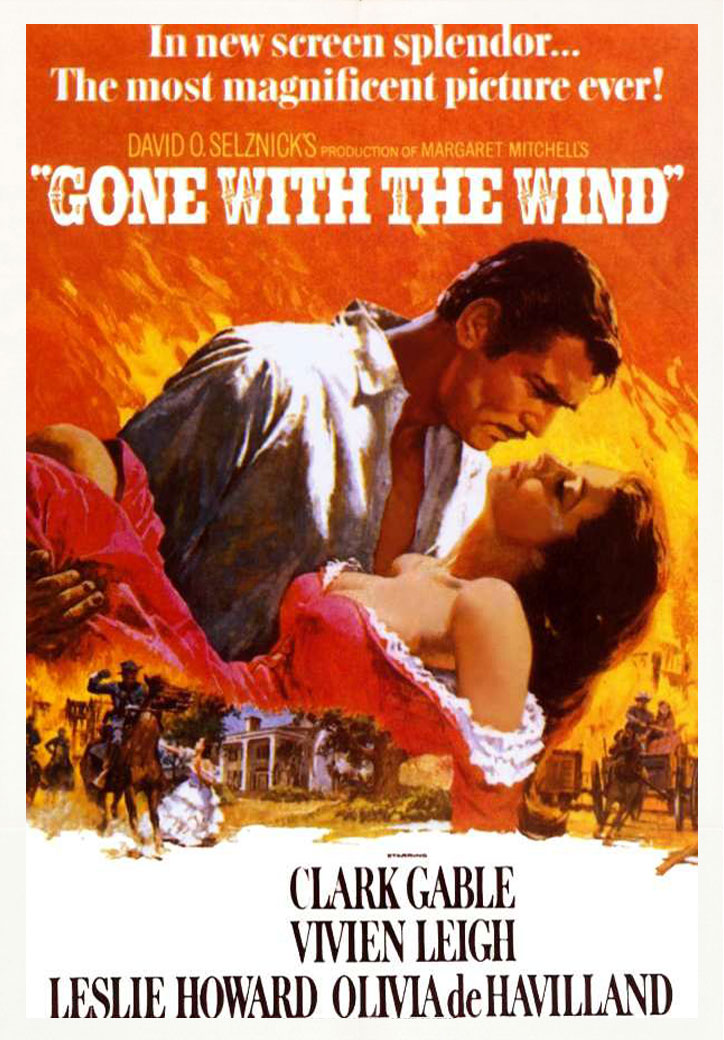 [Note from the Editors: the following information is based on contemporary news items, feature articles, reviews, interviews, memoranda and corporate records. Information obtained from modern sources is indicated. Some contemporary documents have been reproduced in modern sources. Because of the vast amount of material available, a comprehensive discussion of all aspects of Gone With the Wind is not possible here. Information included herein emphasizes the production of the film rather than the personalities of the filmmakers, the artistic reputation or cultural heritage of the film. The reader is advised to consult the Bibliography for titles of numerous books containing additional information on Gone With the Wind.]
The opening credits read: “Selznick International in association with Metro-Goldwyn-Mayer has the honor to present its Technicolor production of Margaret Mitchell's Story of the Old South Gone With The Wind.” Following the opening credits, a written prologue reads: “There was a land of Cavaliers and Cotton Fields called The Old South...Here in this pretty world Gallantry took its last bow...Here was the last ever to be seen of Knights and their ladies fair, of Master and of Slave...Look for it only in books for it is no more than a dream remembered. A Civilization gone with the wind.” In the opening cast credits, actress Barbara O'Neil's surname is erroneously spelled “O'Neill.” In the cast list, the roles of actors George Reeves and Fred Crane, who portrayed the Tarleton twins, were reversed. Reeves's character name is listed onscreen as "Brent Tarleton," while he actually portrayed "Stuart Tarleton," and Crane's character name is listed onscreen as "Stuart Tarleton," ...

In 1861, Scarlett O'Hara, the headstrong sixteen-year-old daughter of wealthy Georgia plantation-owner Gerald O'Hara, is sick of hearing talk about going to war with the North. She much prefers to have beaux like Brent and Stuart Tarleton talk about the next day's barbecue at Twelve Oaks, the neighboring Wilkes plantation. When the twins reveal the “secret” that Ashley Wilkes is planning to marry his cousin Melanie Hamilton from Atlanta, Scarlett refuses to believe it because she is in love with Ashley herself. Her father later confirms the news when he returns home to Tara, the O'Hara plantation, and advises Scarlett to forget about the serious-minded Ashley, because “like should marry like.” At the barbeque, Scarlett acts coquettish with all of the young men, hoping to make Ashley jealous, then, during an afternoon rest, sneaks into the library to see him. He says that he will marry Melanie because they are alike, but leads Scarlett to believe that he loves her instead of Melanie. When he leaves, Scarlett angrily throws a vase and is startled to discover Rhett Butler, a notorious rogue from Charleston, who has been lying unnoticed on a couch the entire time. She is angry at his seeming indifference to the seriousness of her feelings for Ashley and annoyed by his frank appreciation of her physical beauty. Later, when news arrives that war has broken out between the North and the South, Scarlett is stunned to see Ashley kiss Melanie goodbye as he leaves to enlist, and in a daze accepts the impulsive proposal of Melanie's brother Charles.
Just after Ashley and Melanie marry, Scarlett and ...

Olivia de Havilland on GONE WITH THE WIND

Martin Scorsese on GONE WITH THE WIND

Filmmakers on the classic GONE WITH THE WIND

MORE AUDIO & VIDEO >>
Convicts, Overseers, United States--History--Civil War, 1861-1865, Stores, Retail, Infidelity, Prostitution, Servants, Balls (Parties), New Orleans (LA), Self-defense
The American Film Institute is grateful to Sir Paul Getty KBE and the Sir Paul Getty KBE Estate for their dedication to the art of the moving image and their support for the AFI Catalog of Feature Films and without whose support AFI would not have been able to achieve this historical landmark in this epic scholarly endeavor.