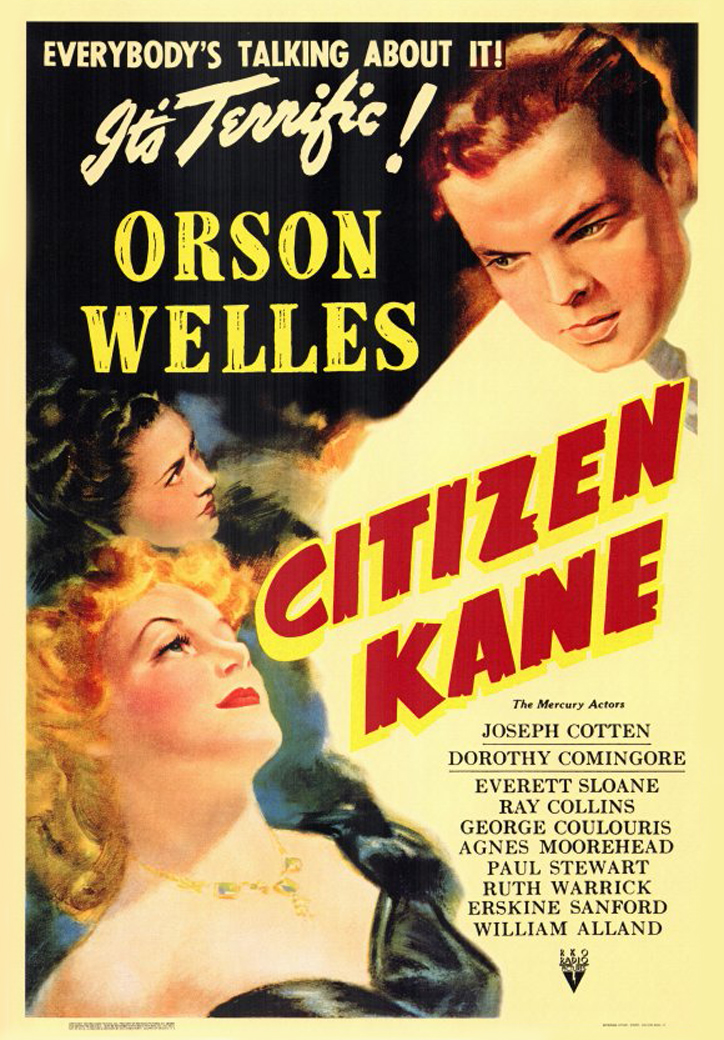 This film's end credits begin with the statement, “Most of the principal actors in Citizen Kane are new to motion pictures. The Mercury Theatre is proud to introduce them.” Organized by Orson Welles and John Houseman in Nov 1937, The Mercury Theatre won critical acclaim for its productions, including Julius Caesar, The Shoemaker's Holiday, Heartbreak House and Danton's Death. However, it was The War of the Worlds, Welles's convincing radio portrayal of an invasion by Martians, broadcast on Halloween night, 1938, that brought him instant celebrity. According to a 1940 SEP series on Welles, Hollywood studios had offered the director a contract for $300 a week as early as 1936. Published accounts of Hollywood's interest did not appear until Jul 1939, when news items and RKO publicity announced that Welles, at age twenty-four and with no professional film experience, had signed a carte-blanche contract with RKO Radio Pictures, Inc. to produce, write, direct and act in one film per year. Welles was to be paid $150,000 per film in addition to a percentage of the gross, but more important to him was the stipulation that no one, not even RKO's president or board of directors, could interfere with him or see his work until it was completed. (Life reported that when RKO executives came on the set of Citizen Kane unannounced, Welles told his company to start a baseball game and walked off.) According to the SEP series, Welles once described the RKO studio as “the greatest railroad train a boy ever had.” In her LAEx ...

Seventy-year-old newspaper tycoon Charles Foster Kane dies in his palatial Florida home, Xanadu, after uttering the single word “Rosebud.” While watching a newsreel summarizing the years during which Kane built a dying newspaper into a major empire, married and divorced twice, ran unsuccessfully for governor and saw the collapse of his newspaper empire during the Depression, an editor decides they have not captured the essence of the controversial newspaperman and assigns reporter Jerry Thompson to discover the meaning of Kane's last word.
Thompson first approaches Kane's second wife, singer Susan Alexander, in the Atlantic City nightclub where she now performs. After the drunken Susan orders Thompson to leave, the accommodating bartender reports her claim that she had never heard of Rosebud. Next, Thompson reads the unpublished memoirs of Wall Street financier Walter Parks Thatcher, Kane's guardian and trustee of the mining fortune left to Kane by his mother: Thatcher first meets young Kane in 1871 at his mother's Colorado boardinghouse. Learning that she has become wealthy from mining shares left her by a former boarder, she is determined that her son will be reared and educated in the East. As young Charlie plays outside with his sled, Mrs. Kane hands over management of the mine's returns to Thatcher, against her husband's wishes, then grants the financier guardianship over her son. Despite the boy's protests, he is sent away to live with Thatcher. When Kane turns twenty-five, he assumes control of the world's sixth largest private fortune, and while professing disinterest in most of his holdings, writes Thatcher that he intends to run ...

MORE AUDIO & VIDEO >>
Puzzles, Butlers, Florida, Hospitals, Sleds, Trusts and trustees, Libraries and librarians, Newsreels, Elections, Critics
The American Film Institute is grateful to Sir Paul Getty KBE and the Sir Paul Getty KBE Estate for their dedication to the art of the moving image and their support for the AFI Catalog of Feature Films and without whose support AFI would not have been able to achieve this historical landmark in this epic scholarly endeavor.