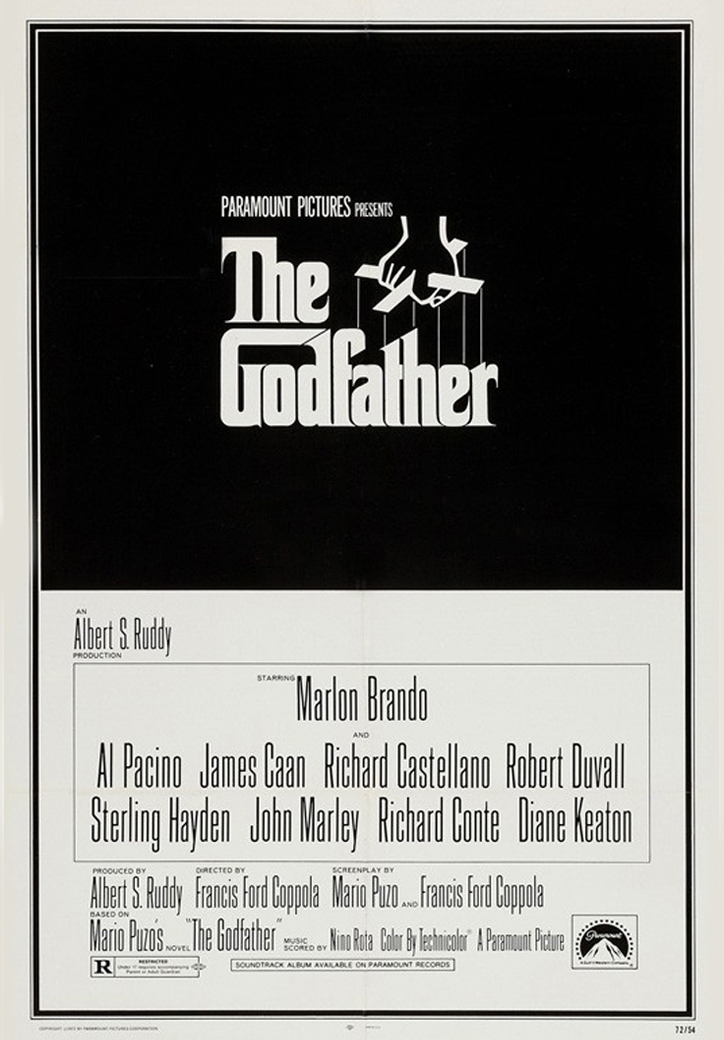 The film's opening title card reads: "Mario Puzo's The Godfather." While the first strains of a trumpet solo of Nino Rota's "Godfather" theme are heard on the soundtrack, the screen goes black, after which the action opens in the study of "Don Vito Corleone" (Marlon Brando). The opening shot is of the character "Bonasera" (Salvatore Corsitto), who also speaks the first few lines of dialogue, beginning with the words "I believe in America." The final shots of the film show the face of "Kay Adams Corleone" (Diane Keaton) as she watches an underling of "Michael Corleone" (Al Pacino) shut the door to the study after his lieutenant, "Clemenza" (Richard Castellano), kisses Michael's hand and addresses him as “Don Corleone.” The screen then returns to black, after which the cast and crew credits begin.
Film rights to Mario Puzo's best-selling novel The Godfather were first optioned by Paramount in late 1968, prior to its publication, according to a 14 Oct 1968 Publishers Weekly news item. According to a 30 Sep 1970 DV article, variously recounted through the years by then Paramount vice-president Robert Evans, Puzo initially brought a twenty-page treatment of the novel to him that was entitled Mafia. A HR news item on 24 Jan 1969 announced that Paramount subsequently secured the rights to the novel, which by that time was listed as number one on the NYT bestseller list. Various 1969 news items added that Paramount had purchased the book for a "bargain price" that would be spread out, based on the number of copies sold, to a ...

In August 1945, during the lavish wedding reception of his daughter Connie, Don Vito Corleone, head of a large New York crime family and "godfather" to the Italian-American community, listens to requests for favors, honoring a long-standing Sicilian tradition that a father cannot refuse a request on his daughter's wedding day. While FBI agents jot down license plate numbers of the guests, and hundreds of celebrants dance, eat and gossip in the Corleone family's Long Beach compound, Don Vito, assisted by his foster son and consigliere, Tom Hagen, listens to a plea by the undertaker Bonasera, who seeks justice for two American boys who mercilessly beat his daughter. After mildly chastising Bonasera for refusing his friendship in the past, Don Vito agrees to help in exchange for some future service. Next, Don Vito greets the amiable ...

MORE AUDIO & VIDEO >>
Street vendors, Godparents, Christmas, Undertakers and undertaking, Battered women, Sicilians, Singers, Sicily, Fruit, Restaurants
The American Film Institute is grateful to Sir Paul Getty KBE and the Sir Paul Getty KBE Estate for their dedication to the art of the moving image and their support for the AFI Catalog of Feature Films and without whose support AFI would not have been able to achieve this historical landmark in this epic scholarly endeavor.